This Weekend at the Taproom!

Did you know our taproom is now open every Friday & Saturday?

Now you do! Here’s whats happening this weekend. 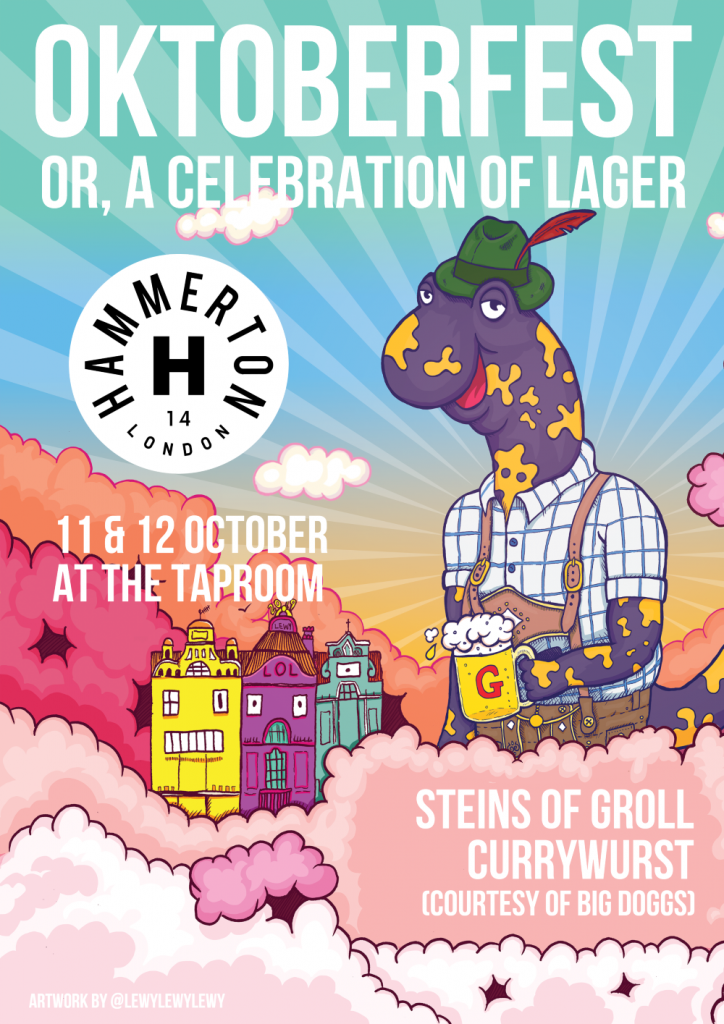 This weekend we’re hosting our first OKTOBERFEST. Grab a hearty Currywurst from our friends Big Doggs out front, a stein of Groll on the bar, and settle in for a cosy evening with friends. 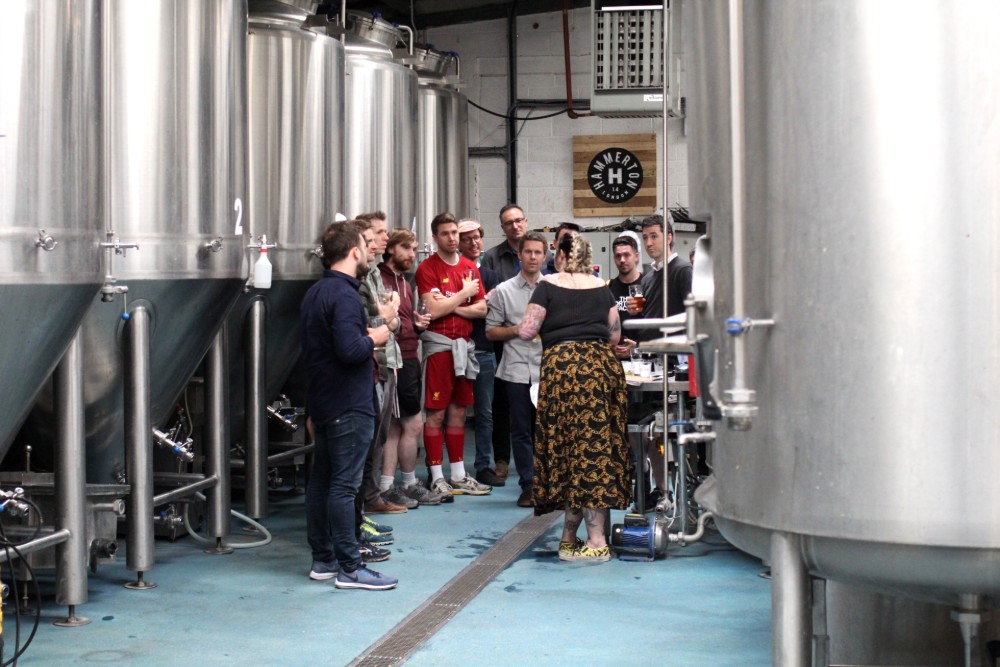 Fancy a tour? We’ve got our lass Rachel in the house hosting 2 tours of the brewery this Saturday, at 2pm & 4pm – tickets available online or over the bar on the day. You get a pint to enjoy on your tour as part of the price, superb. 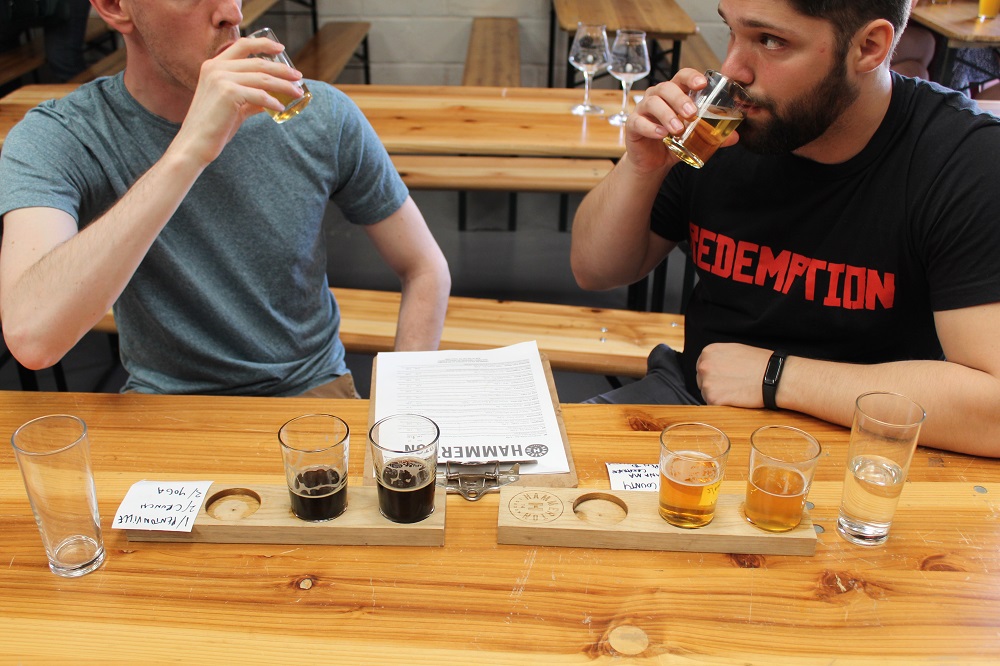 After each tour Rach will cosy down with some flights to take you on a guided tasting of some of our favourite beers on tap right now. Tastings will be happening at 3pm & 5pm, tickets are also available online or over the bar.

Fresh Beer Alert – Welcoming Howard’s Mate to the Line Up! 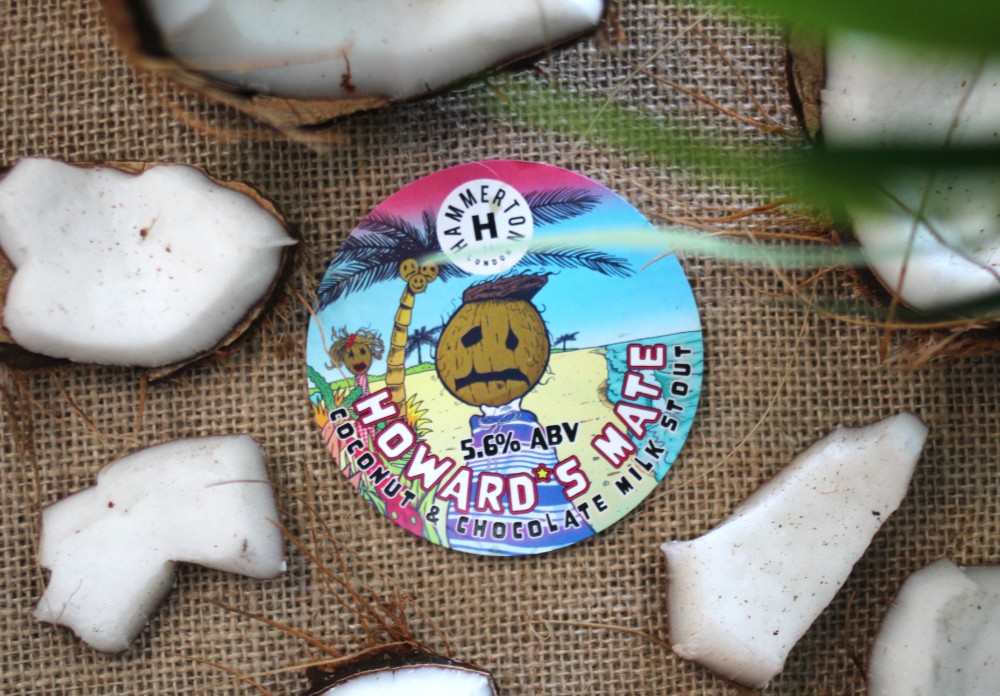 Well, it’s been a hot minute since we posted any news updates over here – but thats because we’ve been so busy cranking out new beers, running a shiny new taproom, and generally working hard at being good at what we do.

But no more folks! We’ll be keeping up up to date with news and brews from around our ways here from now on. Smashing stuff.

First up, we have another new beer to launch. We’ve done this a lot so far this year – and they just keep getting better and better.

HOWARD’S MATE is a super creamy Coconut & Chocolate Milk Stout. He’s thick, he’s juicy, he’s coming to you live at the taproom on Friday 27th. Join us at the taproom for a first taste party – grab your ticket free on Eventbrite and you’ll get your first half of the creamy lad on us.

GET YOUR FREE TICKET

*Tickets are valid for use on Friday 27th or Saturday 28th October. 1 free half per person. 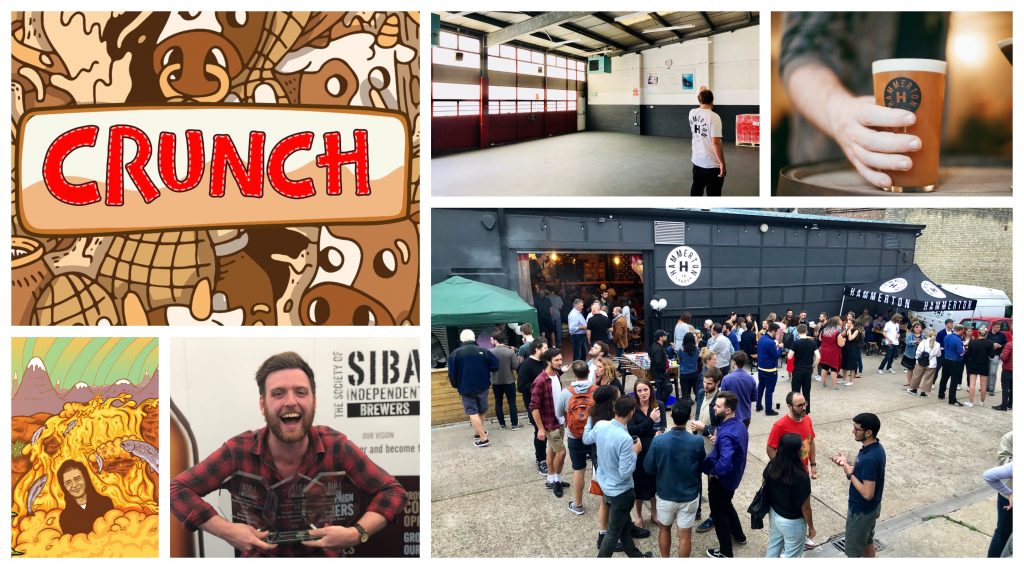 We’d like to say a massive THANK YOU from all of us here at Hammerton. You have all played a major part in 2018 being an incredible year for us.

It’s been an eventful one, and we thought it would be healthy for our souls to recap over all of the awesome stuff that’s happened in the past year…

YEAR OF THE CRUNCH
Since its release at Craft Beer Rising in March, the success of CRUNCH has blown us away; You guys just can’t get enough of it!
The Peanut Butter Milk Stout also ran rampant at the SIBA awards picking up three golds.
CROWDFUNDER: SMASHED IT
In August we successfully crowdfunded for our brand new Brewery Taproom raising £49,128, smashing our original target of £35,000! This funding has also helped us purchase 19 new barrels for ageing!
AWARD WINNERS
This year has been a fruitful one for awards too! Pentonville picked up CAMRA’s ‘Best Stout in London 2018‘, N7 won silver at SIBA, and CRUNCH cleaned up with three SIBA golds including OVERALL best in the bottle/can category.
ALL THE PINTS!
In October we reached 600 brews. That’s 2.3M pints! We also celebrated our 4th Birthday in particularly wet fashion when every member of the Hammerton team had to face the dunk tank at the Brewery’s Birthday Bash!
NEW DIGS!
We eventually received the keys to our new unit in August, which is conveniently right opposite the Brew House! It’s now a fully functioning warehouse and will soon be home to our new offices! The previous warehouse is now the Taproom.
OH, AND THE SMALL BATCHES
Alongside our core range of N1, N7, Islington and Pentonville, we released 14 small batch brews in 2018. In particular, the Vermont Chapters which include brews such as: Waimea River, Fluess Juice, Catamount and Rubus Rain.
_______________

There’s loads more where that came from in 2019. We’ll be pressing on with our barrel-aging project, with the first brew, Black Humour, to be released in in the coming weeks!

Subject to planning approval, we’ll be opening our brand spanking new Taproom on a permanent basis! We turn five years old in 2019, so expect a BIG birthday bash for that one.

We’ll have the massive addition to the Brew House of three brand new 60 hectolitre fermentation vessels, almost doubling our brew capacity! Which in turn, means that we’ll be popping out more special brews than ever before! YAY.

We’ll see you all next year, 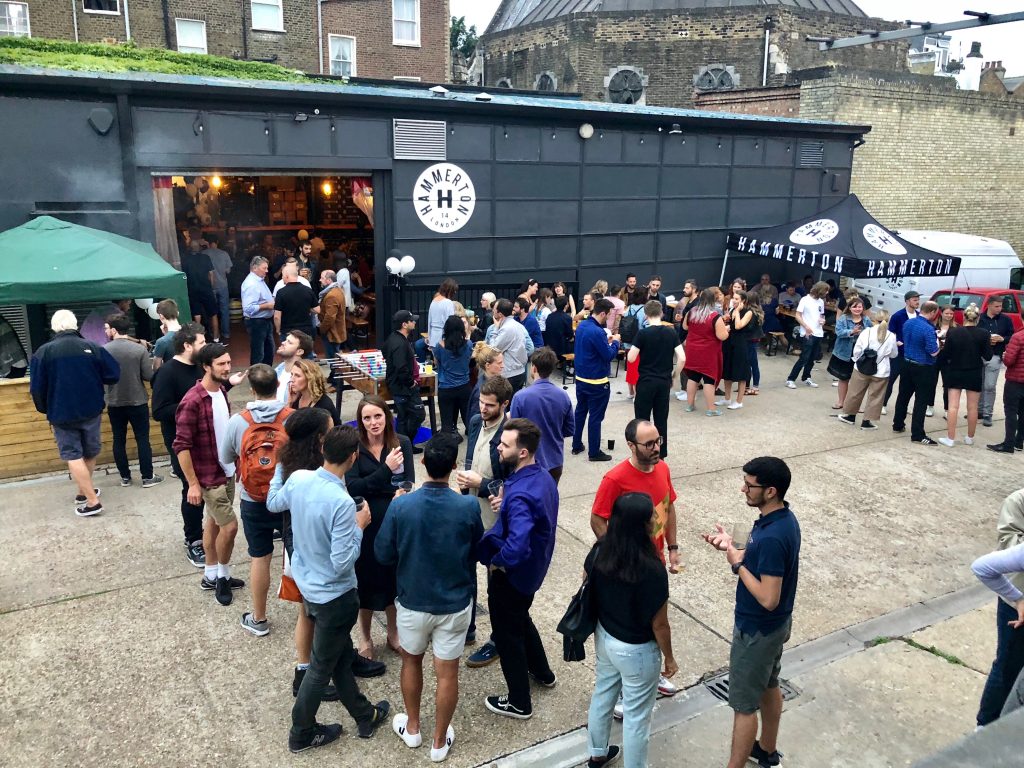 We’ll once again be opening our doors for the usual end of the month shindig at the brewery!

We may still be waiting on planning permission to open up weekly as originally planned, but we plan to make up for all those days lost with some awesome beer, delicious food and fun times. We’re also delighted to say that CRUNCH, our famous Peanut Butter Milk Stout will be available in keg & can!

The food vendor this month will be provided by the amazing and yummy smoked meat specialists, pOrX.

We look forward to welcoming you at the Taproom on Friday 30th November and Saturday 1st December.

P.s. We’re dog and child friendly too! (until 8pm for the latter) 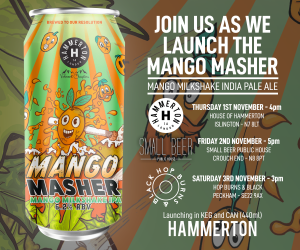 JOIN US AS WE LAUNCH THE PENULTIMATE BEER OF THE VERMONT CHAPTERS: MANGO MASHER!

In baseball, the term ‘Masher’ is used to describe a player who consistently hits home runs. Well, we think we’ve knocked it outta the park with this Mango Milkshake IPA.

With 60 kilos of fresh mango, an abundance of oats and wheat, and dry-hop additions that portray stone fruit characteristics result in a beautifully juicy IPA!

We will be launching the Masher at three various sites around London on separate dates:

House Of Hammerton – Thursday 1st Nov 16:00-23:00 – Our spiritual home. It wouldn’t make sense to kick it off at any other place than our very own pub.

Small Beer Crouch End – Friday 2nd Nov 17:00-23:00 – We love these guys, and when we were deciding which other site in North London to host our launch, they were top of the list. There’s always great beer on offer and a lovely, friendly team.

Pop down and try some delicious cheeses with a great selection of breweries to choose from.

For more info on the event: https://www.eastvillagelondon.co.uk/news/cheese-beer-festival-comes-east-village 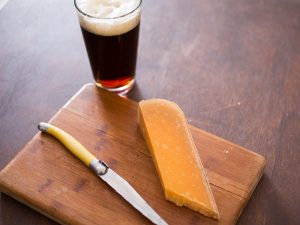 Join us at Clapton Craft this Friday!

Join our very own Eddie at Clapton Craft in Kentish Town this Friday from 5pm. He’ll be rockin’ up with some delicious Hammerton treats to share, and ready to wax some serious beer lyrical.

So make sure you head over, try some delicious beer and kick your weekend off in the right way! 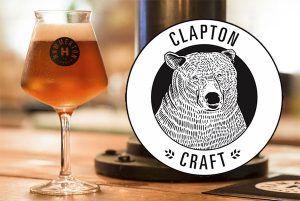 Its time for our monthly brewery taproom opening. It might be getting cold outside but its toasty in the brewery.
Come and join us for a pint of brewery fresh beer, opening times below:
– Friday 2nd February: 5pm until 11:30pm
– Saturday 3rd February: 2pm until 11:30pm
Following months openings : 2nd & 3rd March then 29th & 30th March
All of our core range beers will be available on draught alongside a new special release we have been working on, check Twitter at the end of January for details. We will also have fresh batches of  ‘Giant Isopod’ our Oatmeal Stout and our juicy XPA ‘Panama Creature’.
As always we will also have a street food vendor serving up some tasty delights, so check back soon for details of this.
Its not necessary to reserve a table, but if you would like too please email us at: info@hammertonbrewery.co.uk
PS. We are dog friendly!
Hope to see you soon!
The Hammerton Team

We have some exciting news!

Due to the popularity of our monthly Brewery Taproom openings and requests to open up every weekend we decided it was the right time to open up a pub in our home town, where you can try the full range of Hammerton beers every day, including some exclusive one off brews.

House of Hammerton is less than a mile from the brewery our pub serves as a great opportunity for us to be able to show people what we are about, to get to know our customers and to be able socialize with our community!

Formerly known as the Black House in the 1970’s it is located on Holloway Road ‘The Heart of Islington’. The building itself was briefly the start of radical black Britain. Also bizarrely John Lennon and Yoko Ono stood on the roof of the pub swapping their cut hair with a pair of bloodied Muhammed Ali shorts, true story!!

We have 20 keg lines and 4 cask lines that are all cared for by our brewery and cellar staff to ensure they are in the best possible condition.  Due to our love of beer and the vast number of beer lines we are also able to sell some of our favourite beer from around the UK and the rest of the World.

We also have a drink in or take home bottle shop with over 60 different beers to suit even the thirstiest of beer connoisseurs. If you get fed up of beer we also have a well curried list of spirits and wines to keep you happy. 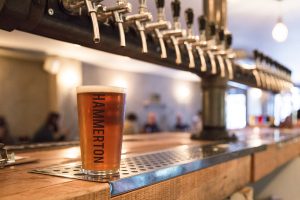 Its time for our monthly brewery taproom opening.
Come and join us for a beer, opening times are below:
– Friday May 26th : 5pm until 11:30pm
– Saturday May 27th : 2pm until 11:30pm
Of course all our core beers will be available plus some of our experimental 2017 brews such as Apprentice No More (Session IPA). We will also have our 2017 version of the hop monster N7.7 (Imperial IPA) in keg, plus a one off pilot brew (2 kegs)
Facebook Event HERE
On the Saturday being only a mile from the Emirates the home of Arsenal  we will be screening the FA Cup Final live as the Gunners take on west London rivals Chelsea, kick off at 5:30pm
Brewery Tours are not available as unfortunately we no longer have the space due to a increase in production. But the upside we have more Beer!!
Table bookings not required as plenty of room, but if you want to reserve a table please email.
info@hammertonbrewery.co.uk
Hammerton Team
Pd. We are dog friendly!